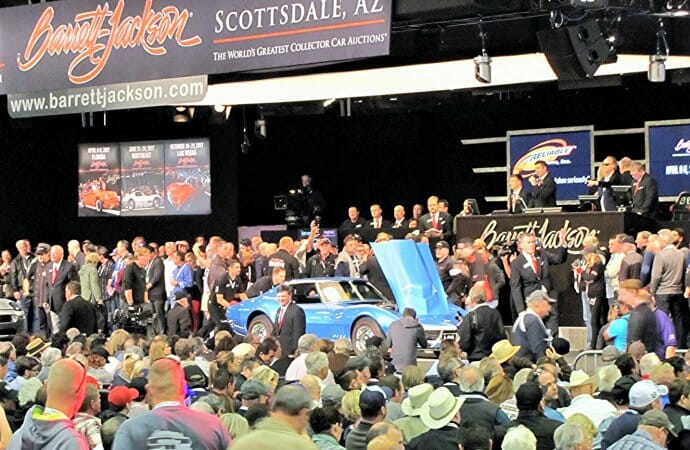 Barrett-Jackson's busy Scottsdale auction block during prime-time bidding | Bob Golfen
Auction hours for Friday and Saturday will go further into the evening
Too much of a good thing has prompted Barrett-Jackson to extend its “prime-time” bidding hours for the Scottsdale auction’s top vehicles on Friday and Saturday, January 17 and 18, adding to the dockets and the amount of time for bidding.
The 49th annual Scottdale auction runs from January 11 through January 19 at WestWorld, serving as the signature event for Arizona Auction Week. Nearly every vehicle auctioned at Barrett-Jackson will be offered with no reserve.
The first production mid-engine 2020 Corvette will be sold in a charity auction | Barrett-Jackson
“Our Scottsdale Fantastic Friday and Super Saturday auctions will be nothing short of historic,” said Craig Jackson chairman and chief executive of Barrett-Jackson, in a news release.
“We’re experiencing an unprecedented surge in high-quality, highly desirable consignments that will be crossing the block on those two days in particular,” Jackson said. “To accommodate these incredible vehicles, we’re extending our prime-time selling hours on both days, giving our guests and bidders a front-row seat to auction history.”
Among the special collector cars crossing the block will be 11 Ford GTs, the highest number offered at auction at one time, with the lowest-numbered example, the 2005 Ford GT VIN 003, selling on Saturday.
The 2005 Ford GT with the lowest VIN will be auctioned | Barrett-Jackson
Also highlighting Saturday’s sale will be the charity auction for the rights to the first production mid-engine 2020 Chevrolet Corvette C8 to leave the factory.
RELATED: Bullitt isn’t only Hollywood star on Mecum’s Kissimmee auction docket
Customs, street rods and resto-mods will be featured as well, including the reigning Ridler Award winner, “CadMad,” which will be auctioned on Saturday.
“Originally one of 99 Cadillac Eldorado Broughams built in 1959 with a body and interior by Pininfarina, ‘CadMad’ is now a custom work of art that took 10 craftsmen over 4,000 hours to build,” according to the Barrett-Jackson news release.
CadMad is is a custom Cadillac that won the coveted Ridler Award | Barrett-Jackson
Barrett-Jackson president Steve Davis said that the 2020 Scottsdale auction has so many high-quality consignments that additional display space has been allocated at WestWorld.
“We’re not only utilizing every square inch of our usual covered areas to display cars, we’re also preparing the Equidome at WestWorld – where our bull riding and bullfighting special events have been held in the past – to accommodate the outpouring of quality consignments,” Davis said.
“This will be the collector car auction of the year,” Davis said of the extended-hour prime-time sales. “We’re inviting all of our guests to stay later into the night and celebrate the cavalcade of highly coveted, rare and desirable collector cars crossing the block Friday and Saturday.”
► Show Full Signature
Never, never, never give up.
1 - 1 of 1 Posts
Join the discussion
Continue with Facebook
Continue with Google
or sign up with email
Recommended Reading
Read More
Read More
About this Discussion
0 Replies
1 Participant
Last post:
R.S.LOGAN 2 mo ago
Ford Forums
Ford Forum is a community to discuss all things Ford. Check out our discussions on the Ford Escape, Mustang, Edge, F-150, Raptor, Explorer, Focus, Fusion, Fiesta and more!
Full Forum Listing
Explore Our Forums
The Pub Australian Falcons General Tech Cleveland Tech Ford Racing Across the Globe
Popular Communities