Joined Apr 24, 2007
·
20,504 Posts
Testing for the Bloodhound LSR is almost complete, and it's already achieved some rather impressive feats 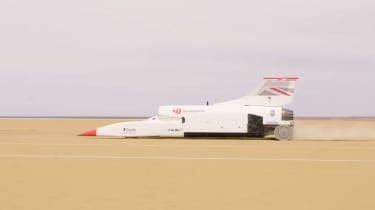 8
One could say that the Bloodhound project has had its fair share of ups and downs, almost coming to a complete close late last year when funds ran dry. Despite initial fears, over a decade of work was saved by British entrepreneur Ian Warhurst, acquiring the project for an undisclosed sum in efforts to keep the 1000mph dream alive. Last month, it touched down in South Africa, and test result are looking promising.
The aim for the latest test run was to achieve a speed of 600mph, but a monumental 628mph was the peak GPS figure, completing all test objectives in the process. Of course, to achieve this, full afterburner was required for the run, firing the LSR across the Hakskeenpan with the equivalent of 54,000bhp. As you'd expect from such a groundbreaking piece of engineering, testing has surfaced a few niggles, but the rare absence of wind proved it could be surprisingly stable at high speeds.


Bloodhound LSR engineering director, Mark Chapman, said: ‘Newquay was all about getting up to speed and finding out how quickly we could get the engine to full power and accelerate using max reheat. Andy [Green] was on the throttle for two seconds to reach 200mph (322kph) in eight seconds. Here at the Hakskeenpan on a ten-mile (16km) track we can accelerate for much longer, achieve higher speeds and investigate the car’s stability, performance and drag, all crucial as we move towards setting a new world land speed record.’
Powering the machine is a Rolls-Royce EJ200 jet engine from a Eurofighter Typhoon, alongside an additional cluster of rockets to help it reach the magic 1000mph. Such a figure would eclipse the 763.035mph record set by Thrust SSC by quite some margin, firing it across the desert at 447 metres per second – that’s enough to travel the length of a football field in 0.234sec, and the entire length of Wales (170 miles) in just 10 minutes.

Despite the cutting-edge tech, current plans have a 560bhp Jaguar V8 at the heart of LSR. Pumping fuel to the jet engine requires rather a lot of power, meaning such an engine is the natural, cheapest place to turn – hopes are to replace this with a more space-efficient electric motor and batteries, technology that didn’t exist when the project began a decade ago.
1 - 1 of 1 Posts
Join the discussion
Continue with Facebook
Continue with Google
or sign up with email
About this Discussion
0 Replies
1 Participant
Last post:
R.S.LOGAN 8 mo ago
Ford Forums
Ford Forum is a community to discuss all things Ford. Check out our discussions on the Ford Escape, Mustang, Edge, F-150, Raptor, Explorer, Focus, Fusion, Fiesta and more!
Full Forum Listing
Explore Our Forums
The Pub Australian Falcons General Tech Cleveland Tech Suspension | Wheels&Tires | Brakes
Popular Communities