We’re not 100 percent sure what’s going on in Canada right now, but it would seem that our friends up north have discovered just what a fantastic hooning machine the Ford Mustang GT really is. First, we had a youngin’ steal his ex-girlfriend’s Mustang and go for a wild joyride. Then, we had a guy block off an intersection to rip off some donuts while his passenger shot off fireworks. Now, it appears that a young Canadian drifted his 2019 Ford Mustang GT into a creek in Cranbrook, British Columbia. 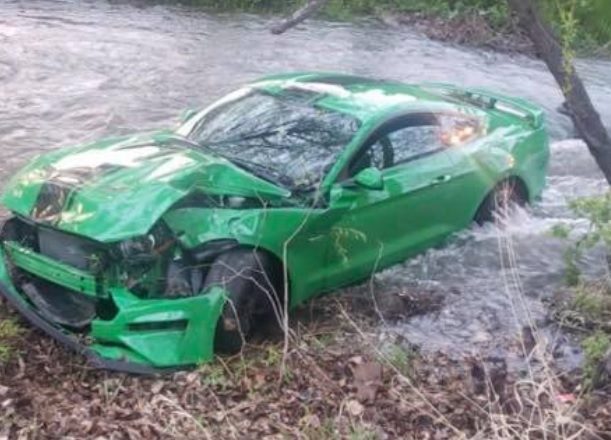 Making matters worse, the young man had apparently just purchased his Need For Speed Green pony only days before turning it into a very expensive boat. The crash happened, as they often do, when the driver attempted to drift his shiny new Ford Mustang GT on wet roads. But he quickly discovered why that was a terrible idea.
Sponsored Links

Apparently, the driver had gathered with his friends in a local mall parking lot prior to the incident. At some point he left, which is generally when things go bad for Mustang owners who don’t know how to tame the wild pony. The urge to show off for his friends overwhelmed, as it often does. The driver was reportedly quite inexperienced, which, when coupled with wet roads and a Ford Mustang GT, is typically not a good combination.

Thankfully, no one was hurt in the crash, except for the poor Mustang. In fact, it’s pretty clear from the owner’s social media posts that he’s got a pretty good sense of humor about the whole thing.
Sponsored Links

For now, we’ll just have to wait and see if Canada’s hot streak continues. Heck, if our northern neighbors keep this up, they might just develop a bit of a reputation stigma much like the one we American Mustang drivers have enjoyed for some time now.

We’ll have more about the latest wild Mustang shenanigans as they happen, Canadian or otherwise
► Show Full Signature
Never, never, never give up.
B

Joined Jul 30, 2011
·
1,328 Posts
I suppose that even Canadians are not immune from stupid, but lest I judge, I recall being young once upon a time. Tough learning curve, however. And about that color; totally tasteless. It belongs on a Challenger.